Two methods have been developed for estimating by DMT the p-y curves for the case of short-term, one-way static first-time monotonic loading (Robertson et al. 1987, Marchetti et al. 1991). The Robertson et al. 1987 method is an adaptation of the early methods for estimating p-y curves, which utilized soil properties obtained from laboratory data. The Robertson et al. method replaced these laboratory properties with equivalent soil properties, estimated in situ by the DMT.
Marchetti et al. (1991) streamlined the Robertson et al. (1987) method for clay (anchored to the Skempton e 50 – Matlock cubic parabola approach), and proposed a more direct procedure for predicting the p-y curves (only for clay). The Marchetti et al. 1991 method adopted, as curve p-y, an hyperbolic tangent law. The initial slope is estimated based on the dilatometer modulus ED, and the ordinate of the horizontal asymptote is estimated based on the first DMT corrected reading po. 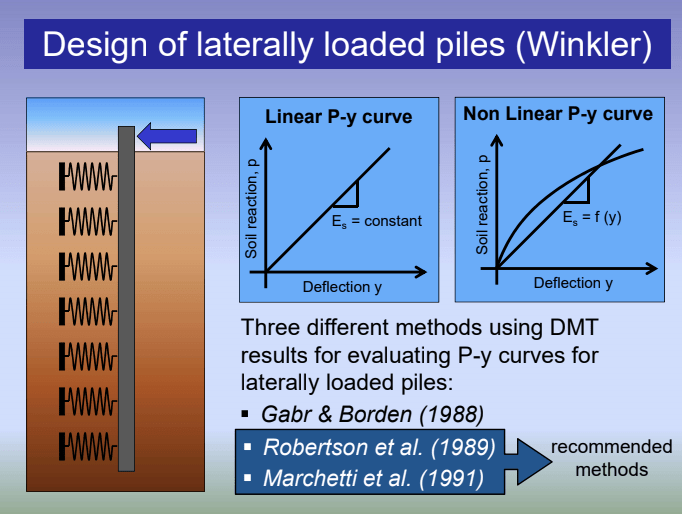 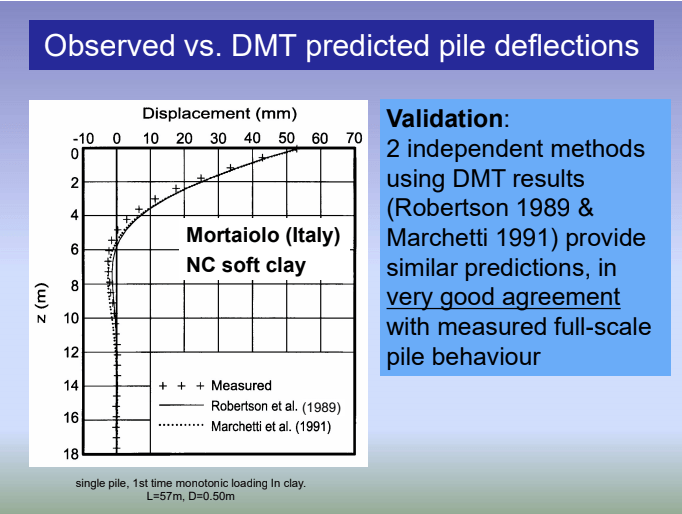 (NGI, Georgia Tech and tests in Virginia sediments) have shown that the two methods provide similar predictions, and that the predictions are in quite good agreement with the observed behavior. Since the accuracy of the two methods appears similar, use of the Robertson method (covering both sands and clays) is adequate. A favourable aspect of DMT based methods is the availability of many in situ DMT data even at shallow depths, i.e. in the layers dominating the lateral pile response.

In order to design the piles, cyclic p-y curves are necessary, for the frequencies of the wave and of the structure. The DMT, as it is, permits the applications of many load-unload cycles at any given depth. However, as today, design methods for translating the p decay in front of the membrane to the p decay on the shaft of a pile have not been developed. Research in this direction has just been initiated.

Initial trial experiments have been conducted recently (Marchetti 2015). They consisted in obtaining, in addition to the usual A and B pressure readings, subsequent pairs of A and B values, by repeating at any given depth several times the expansion of the membrane. The aim of this study is to acquire indications on the decay of A and B with the number of cycles. It has been found that, after an initial decay, stabilization of A and B occurs after a relatively small number of cycles.

More on the origin of the Flat Dilatometer in:

Other applications to design